By Ben and Owen Franks

Ben and Owen Franks are professional rugby players for the New Zealand All Blacks, winners of the 2011 Rugby World Cup. Take a peek into their lives and see how they balance training, family and nutrition.

In this Part 1, the family and their coaches share how the brothers became professional rugby players.

“From a young age, we were always training down at the park and going for runs, and Dad had us throwing all sorts of stuff,” Owen says. Once they reached their teens, the boys decided they wanted to be professional rugby players.

“For me, there was no other option in life but to become an All Black, and it was always in my head, you know, growing up and playing rugby,” Owen says.

The brothers show how hard they train and how training together has helped them both succeed.

Please note: These files are larger than normal Journal videos. For smoother viewing, please download the entire file to your hard drive before watching it (right-click and choose Save Link As...).

Part 2 will be published Sunday, Jan. 8, at 4 p.m. PST. It covers the Franks brothers throughout the 2011 rugby season and includes events such as the devastating earthquake in their hometown and their victory at the Rugby World Cup. 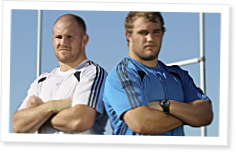 By Ben and Owen Franks

Albert Azaryan: Lord of the Rings

Ben and Owen Franks are professional rugby players for the New Zealand All Blacks, winners of the 2011 Rugby World Cup.

In Part 2, the brothers are training on the beach, and it… Continue Reading

To hear Albert Azaryan tell the story, you’d think he was just doing his due diligence.

At the 1953 U.S.S.R. Championship, while holding an iron cross on the rings, he actually… Continue Reading

On May 4, 2013, Robert “The Ghost” Guerrero faced off against boxing welterweight champion Floyd Mayweather. After 12 rounds, the decision was unanimous: Mayweather retained his title.

At 13, Anna Tunnicliffe decided she wanted to win an Olympic medal in sailing. And she did, taking gold in the Laser Radial class at the 2008 Olympics in Beijing.

“(It’s) the most… Continue Reading

Great video! Looking forward to the rest of the series.

loved watching this, can't wait for the next installment in this series.

Really cool video! Can't wait to see the next parts of the series

I enjoyed that.
I'm not a rugby follower, almost heresy material down here, but as a New Zealander seeing the history Christchurch Boys has of producing international level players it's emotional stuff.
The game is such a part of our culture that even if you're not up on who is in the current teams, you're always at least peripherally aware of how they're going.

The Franks boys do a great job on those mobility drills. They make them look easy and they're not. Very smooth and polished, speaking of a lot of hard work to gain the skill they demonstrated.

Awesome video. My favorite aspect of the Franks is their work ethic. It is a great lesson for kids. You don't have to be naturally gifted to be a pro, you can do it with hard work and dedication. Too hyped up, now I have to go run around the block.

Inspirational and intriguing at the same time. It's great to see professional athletes incorporating Crossfit into their training and also, running a Crossfit facility. What the Frank's brother do is more amazing when you consider the workload of a pro Rugby Player. they play for their province, Canterbury in Super Rugby which involves a sixteen game season travelling between New zealand, Australia and South Africa, and this year the UK, then for the national team in New Zealand and worlwide every year. Their longevity, durability and work ethic is staggering.

Great to see a couple of nice pieces on CrossFit meets Rugby of late. As a high school coach (and ref and ex-player) it's such an obvious fit.

Big (England) rugby fan. This video shows why the All Blacks are currently the best team in the world. I will share this video with my Box in Hood River OR. Can't wait for part 2

Love it! It's great to see the acceptance of the CrossFit method of training in the professional ranks of sport.