The squat snatch is more efficient—there’s no doubt about that. But for some people, particularly those with flexibility, agility and balance issues, the split snatch might be a better option.

Josh Everett, who’s known as one of CrossFit’s best Olympic weightlifters, uses the split snatch himself and goes over its finer points.

The first and second pull are the same as in the squat snatch, and the footwork for the split snatch is similar to that of the jerk: the feet go into a lunge position. In a split snatch, the loads will be lighter than in a max clean and jerk, so the lunge will be deeper than it is in a jerk. The back knee, however, must stay off the ground in competition.

When snatching, you have to pull the bar about 6 inches higher when using the split technique, but it’s a little bit more forgiving of form errors than the squat snatch. That means the variation is well suited to fast, powerful athletes who can pull a bar very high and get under it quickly.

And even if you have a great squat snatch, why not try the split once in a while? CrossFit, of course, is all about variety. 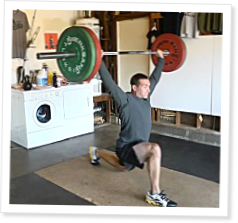 Planning for a Win

Josh Everett reveals the six-week training program that earned him a victory in the 85-kg class at the CrossFit-USAW Open in Colorado Springs.

When I first heard of the… Continue Reading

Developing the Behind-the-Neck Split Jerk With Coach B: Part 1

By Mike Burgener with Dave Lipson

After working on his own for a few months, Pat Barber, the subject of the last two months' video articles on the fundamentals of the snatch, visits Mike Burgener for a coaching… Continue Reading

Working his magic on Dave Lipson, Coach Mike Burgener refines the split jerk by breaking down the movement and rebuilding it.

In Part 1, footwork is the foundation, and Burgener coaches… Continue Reading

I don't know that I've ever been more excited to see a CF video.

Josh Everett is the man. Excellent instruction on the split snatch. I wish I was half as fast as he is with his footwork!

Thank you Josh. This video makes me wonder how many more movements are out there that would benefit us older athletes with flexibility issues? More like this please!

Thanks Josh! I enjoyed you teaching this in Seattle last month. Since I am in my forties and struggled with knee problems, the split snatch has really made a difference for me. Great video!

Great instructional video. As an older athlete (63) I need every trick in the book to compensate for my lack of flexibility. What confused me though was the point you made about needing to be faster. My loss of flexibility correlates with a loss of speed?

Because you can't get as low in a split snatch as a full snatch, you need to generate more power and speed to get height on the bar. To lift as much weight as possible, you need quick footwork and speed pulling under the bar.

This is really great information. I am personally a big fan of the split snatch and split clean. I have a number of issues working against me on the the snatch, including: terrible shoulder flexibility, long femurs + short torso. The split keeps the torso vertical, which makes it way easier to keep my elbows up on the clean and get the barbell overhead on the snatch. I think the split valuable tool with those who have ROM deficits for one reason or another.

Excellent video. At the Oly cert in 09' Mike Burgener suggested i stick to the split snatch due to poor thoracic mobility and tight shoulders. I followed his advice for a year until Kelly Starrets mobility wod came online, after working daily at improving my flexibility i eventually developed the ability to overhead squat and snatch properly. Anyone out there that has mobility issues should not use this video as an excuse not to be able to ohs and squat snatch.
Pat Barber said i'd the tighest shoulders he'd ever seen, well not anymore thanks to kStar!

josh is the man! yea buddy!

Thanks, great breakdown/explanation about the exercise... What about dumping the weight? Same rules apply as OHS? Anything inparticular to keep in mind?

I understand the need to identify a "best" side when it comes to splitting, but is it common to practice splitting the "wrong" way during training in order to reduce potential physical problems associated with asymmetrical development when it comes to strength, flexibility and coordination?

I apply that concept when it comes to split gripping for deadlifts, and I have used it in the past for a variety of other activities. It also functions as a handy equalizer when matching participants for sports such as tennis or racquetball. If one player is considerably more skilled than the other making them play with the wrong hand can make the activity more interesting for everybody involved.

Great video, Josh. Insane speed on the pull under.

I would love to see a follow-up video on how to fail on a split snatch.

I dont think anyone would use this as an excuse on why NOT to work on mobility, especially since Kelly has been gracious enough with his time for the mobility project, but this isnt just for older lifters. My wife is trying this out as she has an ankle mobility issue that limits her squat capabilities, even in oly shoes, but to train this along with working on mobility is the key to success, hell I split clean when my hips are too tight or something else limits me for my training the full squat style. Very good video though and glad more people will be splitting because of it.