He’s coached over 1,000 games behind the benches of four NHL teams, and he’s won over 500 of them. He’s been a coach at three NHL All-Star Games, and he’s been a part of two Canadian teams that won gold medals at the Olympics.

Hitchcock has also hoisted hockey’s Holy Grail, the Stanley Cup, while coaching the Dallas Stars in 1998-99.

“Hitch” is a hockey guy through and through. 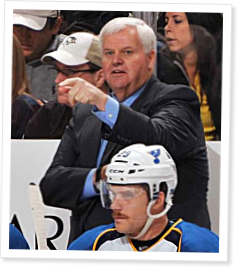 Mike Warkentin explains how one athlete overcomes a mis-load to put forth an impressive CrossFit performance.

The bar came off the floor funny.

Even from across the gym, it… Continue Reading

By Dawn Fletcher and Miranda Oldroyd

When Chris Spealler walks into the StubHub Center this year in Carson, Calif., it won’t be as an athlete. It will be as a media commentator.

“That is going to be a really difficult… Continue Reading

“I think we defeat ourselves sometimes mentally before we even hear ‘3, 2, 1 go!’ And just learning how to identify the stuff and get better would make a huge difference,” says HQ Seminar Staff… Continue Reading

2 Comments on “Hitch Is Hooked”

Love this. Great article, Mike. Don't know if "Hitch" has a Journal subscription, but so glad he's found the community. He might be glad to hear that it includes some die-hard puckheads, too... (Go Bruins. Sorry, Hitch.)

I play hockey at least twice a week. I do crossfit at least 4 days a week and I've noticed my abilities in Hockey have increased due to my crossfit training. I get less tired during my shifts and I've become a much more balanced and powerful skater. The other day I chased down this guy on a break away with what seemed like little effort. I won't complain next time we do squats!