Ones to Watch by Hilary Achauer - CrossFit Journal

Skeleton racing is a sport that involves hurtling headfirst down an icy track at speeds of more than 70 miles per hour with no steering or braking mechanism. It’s something nobody in his or her right mind would do.

When Ryan Fischer heard about an open call for a spot on the Olympic skeleton team in 2007, he signed up to try out right away. Fischer kept getting hurt with skeleton and bobsled racing, tearing his hamstring and later his ACL, so in 2010 he was looking for something new when he wandered into Ute CrossFit. Given Fischer’s Olympic-weightlifting background, it wasn’t long before he was coaching and then competing.

Like many successful CrossFit athletes, 31-year-old Tiffany Hendrickson has a background in college gymnastics. After college, Hendrickson moved to England for four years with her husband, where she focused on raising her three children. Hendrickson remained active with rock climbing and cycling, but nothing fueled her competitive fire until she saw a CrossFit gym near her home in Utah in February 2010. Hendrickson didn’t know anybody who did CrossFit, but she was immediately hooked.

Who are your dark horses in the 2012 Reebok CrossFit Games Open? Post names and details to comments. 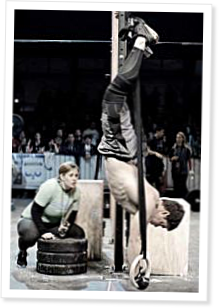 3 Comments on “Ones to Watch ”

Ryan Fischer is an awesome dedicated athlete who pushes himself to the limit!!!! Bring it home Ryan

Fish is going to turn some heads this season. I see him in the top ten. I'm thinking somewhere around 8th.