Yes, You Can by Hilary Achauer - CrossFit Journal

In The CrossFit Life

Hospitalized with bipolar disorder, Chuck Wagner finds a way out of the darkness through running, CrossFit and an inspiring father-son team. Hilary Achauer reports.

In August 2010, Chuck Wagner was in good shape physically. A young man in his 20s, he was training for a marathon and played competitive lacrosse. Wagner was a working professional living the good life at the beach in San Diego, Calif. Inside, however, he was falling apart. Wagner kept pushing forward, stuffing down his increasingly dark thoughts until he lost control one night at a work event.

That night set off something within Wagner, and things kept sliding downhill until he ended up in the hospital in August 2010, depressed and suicidal. He was later diagnosed with bipolar disorder. When he was in the hospital, Wagner heard a lot about what he shouldn’t do and what he couldn’t do now that he had been diagnosed with a serious mental illness. Everyone told him he had to stop training, focus on his mental health and find the right balance of medications.

One of Wagner’s therapists took a different approach. He told Wagner that as part of his treatment, he wanted him to try something new. A lacrosse buddy of Wagner’s told him about CrossFit, and Wagner decided he would check out CrossFit Pacific Beach, the box in his neighborhood. 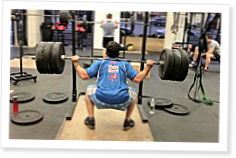 The members of CrossFit Alaska use CrossFit to get into shape for the physical demands of daily life in the North. One member used it to save his life—twice.

Derik Ledesma turned the trunk of his Honda CRV into a mobile CrossFit gym—and still made room for his kids’ car seats. Hilary Achauer reports.

The most common places… Continue Reading

Take a look at the men around you. Notice… Continue Reading

I was diagnosed with bipolar disorder in the fall of 2009 and since than it has been an everyday battle. It was difficult because I was a college athlete playing hockey and wanted to be there for my teammates. My brother was on the team as well and he was diagnosed with bipolar disorder two summers before. Since my episode I have been in search of something to help me cope with the disorder. In my last year at school my trainer told me about crossfit. Finally about a month ago a crossfit box opened up in my small town of Douglas, Ma. So I joined and it has been the best thing I have done. It is also a great coping mechanism. I signed up for the level 1 crossfit certification course since joining.I found this article after I searched " crossfit and mental illness," to see if there is anyone out there who deals with a mental illness and does crossfit. Chuck your an inspiration. After reading the article I was inspired and motivated to continue my journey with crossfit. Good luck with your continued success with crossfit and marathon running and most of all thank you.