The WOW (Workout of the Week) is from Outlaw CrossFit in Alexandria, Va.

Back squat, 20 reps (Note: this will be a single-set test. The recommendation is to use approximately 70 percent of 1RM. Do not rush. The set should be paced, and rest between reps is beneficial.)
Then 3 rounds, each for time, of:
95-lb. push press, 20 reps
20 hand-release push-ups
20 pull-ups
Rest 2 minutes

3:50 Nick Massie is a gourmet chef who specializes in Paleo recipes. He expanded on his comments in CrossFit Radio Episode 217 and described the latest cooking videos he’s produced for his new website. He also discussed Gary Taubes’ Why We Get Fat and detailed what he eats on a daily basis. Finally, Massie gave advice to help average CrossFitters eat like a gourmet chef.

27:00 Travis Bagent is one of the greatest arm wrestlers in the world, and he’s also the owner of CrossFit 304 and an announcer for the Reebok CrossFit Games. Bagent came on the show to talk about his new affiliate, which has taken over a building that used to be a Globo Gym. Bagent described the facilities, including locker rooms, a track and the crown jewel: a swimming pool. He explained how he found CrossFit and how it led to him to the mic at the Games. According to Bagent, being a Games announcer gives him the best seat in the house. Bagent also described his background as a world-champion arm wrestler. 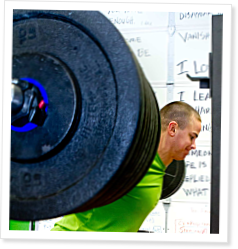 Hey Justin! Thanks you for listening to your audience and changing your intro. I like the new one much better, and now when I listen with my 11 year old, I don't have to explain that you are joking! Keep it up. Loving the interviews and info you are getting out there!

Great interview with Travis. Interesting to learn a little bit about the guy behind the mic. And good luck Travis with this year's Games.

Lastly, gotta keep it real Justin--you radio-show-hostin' bastard. Some of us still aren't afraid of words.