The WOW (Workout of the Week) is the first event of the 2012 Reebok CrossFit Games Regionals.

5:15 Kevin Penner owns CrossFit by Bodyfit. He came on the show to talk about a unique opportunity: he and his staff have been hired to teach P.E. to the students of San Jacinto Valley Academy. Penner said he’s contracted to teach them CrossFit only, and he described how he was able to make this happen. Penner explained how the school got on board and invested several thousand dollars in equipment, and he talked about how he deals with class sizes of 100 students. Penner said the results on the state test have proven that his students increased their fitness dramatically.

31:20 HQ trainer E.C. Synkowski spoke with Justin about her athletic background and how she found CrossFit. She explained how she became a staff trainer and what it was like to attend seminars given by CrossFit founder and CEO Greg Glassman. Synkowski said it would benefit a CrossFitter to attend several Level 1 seminars, and she highlighted some of the benefits of attending the Coaches Prep Course as well. A veteran judge with experience at both the CrossFit Games and Regionals, Synkowski shared what it’s like to judge great movers and how she’s right next to the action but rarely sees the overall competition results until it’s all over. 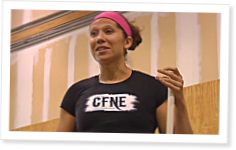 On Episode 305 of CrossFit Radio, host Justin Judkins interviewed Eric O’Connor, a man who wears many hats. This episode was webcast on Nov. 20, 2013.