In Rest Day/Theory, The CrossFit Life

Mike Brown is using his CrossFit work ethic and business philosophy in a campaign to win a seat in the Iowa Statehouse. Hilary Achauer reports.

Mike Brown starts every weekday before the sun is up, heading over to CrossFit Des Moines to coach the 5:30 a.m. class. After teaching classes for a few hours, Brown throws on a sportcoat and a tie and spends the rest of the day shaking hands, meeting with advisors or—his least favorite task—fundraising.

Brown is running for state representative of Iowa, his first try at a political office. This former Air Force pararescue jumper owns and runs two CrossFit affiliates (CrossFit Des Moines and CrossFit Waukee), and he might seem like an unlikely politician. However, he says it’s exactly his experiences as a CrossFit athlete and an affiliate owner that inspired him to run for office. 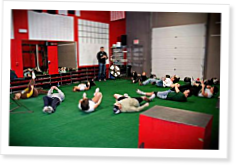 4 Comments on “Politics and Pull-Ups”

This is a great story about a great guy. This article should be open to public access (you don't have to login to access). Talk about good PR for Crossfit! I'd very much like to share this w/the public if possible...

Let's get this guy elected!

Jay and Stephen thanks for your support. I would love to see this article get some more visibility. Let me know if I can help you guys spread the word. Visit www.brownforiowa.com for more details, videos, articles, etc.

Seeing videos like this defiantly inspire me. Thanks CF.