CrossFit Walter Reed began as an experiment with two athletes. Just by chance, I had two injured veterans referred to me in order to take part in my Working Wounded Program at Potomac CrossFit. This class meets twice per week and is designed to keep athletes training during injury. I had been coaching a Working Wounded class for about a year using Coach Greg Glassman’s Working Wounded article as my guide.

Capt. Chip Gabriel, fire support/field artillery officer, U.S. Army, survived multiple IED and indirect and direct fire incidents with his unit in 2009 in Afghanistan. After what he calls “some bumps and bruises,” in January 2010 he was incapacitated by a vertebral artery clot that led to a stroke. Cpl. Pat Murray, machine gunner, U.S. Marine Corps, was wounded during an IED blast Sept. 4, 2006, in Fallujah, Iraq. Pat is missing his right leg above the knee and sustained a host of other injuries.

Both men were referred to me separately but at the same time. I thought this would be a great opportunity for me as a coach to expand my knowledge of treating injured athletes, and I hoped I could do some good for Chip and Pat’s health. 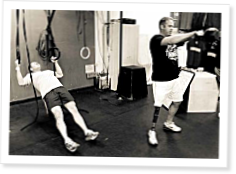 Colonel Bryan P. McCoy is a published author on combat leadership (The Passion of Command: The Moral Imperative of Leadership) and is the subject of the book McCoy’s Marines: Darkside to… Continue Reading

In this special episode of CrossFit Radio, Coach Glassman, Mark Rippetoe, Lon Kilgore, Robb Wolf, and Andy Stumpf come to the table with facts and science to combat the attack waged against CrossFit, its… Continue Reading

Jeff Barnett finds some similarities between being an officer in the U.S. Marines and being a leader at a CrossFit affiliate.

7 Comments on “Serving the Soldiers”

Since this article was submitted a few months ago, want to update folks on where we're at with this project:

1) Melody Feldmen of CrossFit MPH was left out of the article. I apologize for that oversight. Melody has been a critical part of CrossFit Walter Reed and we thank her for her support.

2) Dave "Chef" Wallach has been running a program for wounded warriors at his gym, CrossFit Rubicon, for some time now and was planning on doing an adaptive CrossFit competition with his athletes too. We've now found each other and are working collectively on putting on an event this fall at CrossFit Rubicon.

3) A big part of the reason why I decided to write this article is because I'd like to find better ways to train these guys. We're not a charity, we don't want anybody's money to support what we're doing. We just want to make the training better, so if you train wounded athletes, please reach out so we can compare notes.

4) We're getting a dedicated CrossFit space on Walter Reed MMC. Thanks to the Navy and Marine Corps folks that made this happen, and big thanks to CrossFit HQ (especially Jimi Letchford) for donating the gear to make this a first class training facility.

Do you guys still come to Walter Reed? I was med evac'd here back in October and have not seen or heard anything about this until now. I workout down in building 17. I'd love to get involved with something like this as I'm healing.

We should have our own space open shortly.

As a mom of an Army soldier I thank you so much for what you are doing to help these soldiers.

I'll have to try to make it next week. Couldn't make it today.

Brian this is awesome work, thank you. Continuously amazed at the kinds of people crossFit attracts. humbling and inspiring!

Looking to develop an adaptive CF program at our box CF La Verne in southern california to serve our veterans. Anybody with programming info or suggestions I would love to hear from you... Email- iagomg@hotmail.com