In Memory of Sarah by Chris Cooper - CrossFit Journal

In Memory of Sarah

Catalyst Fitness sees one of its members die from a brain tumor and re-dedicates itself to exercise for the benefit of the brain. Chris Cooper explains.

Sarah Grand arrived at our gym in 2008, bald and pierced, with a chip on her shoulder.

She wore the baldness as if she was daring you to ask why. There was no victim in her swagger, no black cloud over her death-metal baseball cap.

Two weeks earlier, she’d been swinging her legs as she sat perched on a doctor’s examining table. Her mother, father and boyfriend were with her. The doctor gave them the diagnosis: a large tumor in the brain. Situation: terminal.

He offered Sarah a plastic bag—a Ziploc full of pills—to help with the anxiety and depression that were sure to come.

Sarah looked up from the baggie and met the doctor’s eyes.

And she started CrossFit. 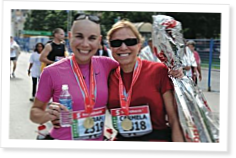 Chris Cooper talks about multiple sclerosis and how trainers can try to help athletes with the disease.

Rewired by the WOD?

As researchers start to close in on the causes of autism, some CrossFit gyms are testing treatment theories that suggest exercise can help.

(Corrects to clarify that some children with Asperger’s, not… Continue Reading

With the NHL and NFL seasons in full swing, concussions are a hot topic. Blows to the head can have serious short- and long-term consequences, so why do athletes risk brain damage by… Continue Reading

5 Comments on “In Memory of Sarah”

to lay on the floor and experience the nirvana after a WOD - it comforts me to know that she enjoyed perhaps one of life's finest pleasures. need i say more?

Great article! Thank you for sharing this.

That was a great article! I hope this program is able to reach many people and help regain some of what was lost.

From someone who has been doing CrossFit for quite some time, and now suffers from chemo brain, I can totally relate to this article, and find it very interesting. It is a program I would eagerly jump into, if it were available in my area. Every single day I am doing something to combat the effects of chemo brain. Every single day. It's so nice to know that I can combine these things with my WODs!