In December 2003, in lieu of a traditional CrossFit WOD, Coach Glassman gathered the 6 a.m. “Team Six” athletes around the whiteboard for a lecture on the theoretical development in the hierarchy of an athlete. This lecture, like most of the conversations, seminars and interactions I had with Coach Glassman, proved to be life changing.

Coach explained that if he intended to forge the ultimate athlete, he would start with nutrition. Coach believed that nutrition was so important in the development and sustainment of an athlete that in a perfect world he would put an athlete on an island for 30 days with nothing to do except eat the right way. During a previous lecture from Coach in February 2002, I had learned that by “eat the right way,” Coach was referring to a special balance of 40 percent carbohydrate, 30 percent protein and 30 percent fat that would ultimately result in leaner muscle mass and increased athletic capacity in the gym.

Coach provided several compelling reasons for the focus on nutrition. The first was a simple rule he called the “1 to 23 Rule.” Coach proposed that most athletes train in CrossFit approximately 1 hour a day. This left 23 additional hours during the day in which the athlete would have to make a choice: would he or she use the time outside the gym to support or unravel the hour that had been invested while inside the gym? 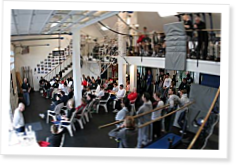 Nicole Carroll writes of her struggles with implementing the Zone Diet in, “Getting Off The Crack.” At first Nicole thought she was starving and wouldn’t… Continue Reading

5 Comments on “Diet Secrets of the Tupperware Man Vol. 2”

Proper nutrition is absolutely essential, more so than the details of an excercise plan. It is properly positioned at the base of the pyramid. I also believe that the cause of most chronic diseases is poor nutrition.

why does zone prescription of macronutrient proportion optimize insulin and other hormone response vs. some other proportion (say a higher protein and fat vs. carbs)?

Mr. Amundson's first Tupperware Man article was paramount to my adoption of the zone. This adoption has lead me down the path of paleo and then paleo zone. I can not detail enough the impact this guidance has had on my and my family's health.

Thank you Greg for this new edition and furthering the journey.

Great stuff Greg. You continue to inspire and motivate. Thanks for all that you do for the CF community.

Greg is a pillar of inspiration and most importantly, leads by example. Thanks for your contributions, sir!