On Day 3 of the South West Regional, CrossFit fans around the world held their breaths, incessantly refreshed their Internet browsers and anxiously awaited the fate of one of the world’s most beloved CrossFitters: Chris Spealler.

Matt Hathcock, owner of CrossFit Unbroken, held the final golden ticket to the Games heading into the last two events. On Sunday morning, the 26-year-old led Spealler by three points; after Sunday morning’s event, he had Spealler by five. A Games spot was Hathcock’s to lose.

As the Regional’s final heat lined up, 95 percent of the eyes in the building might have been on Spealler, but Shannon Simpson’s eyes were 100 percent devoted to Hathcock. Simpson, Hathcock’s girlfriend, vividly remembers those fateful 17 minutes. 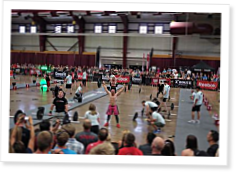 6 Comments on “The Guy Who Almost Beat Spealler”

Good to see Matt get some press as well... 4th for 2 years in a row, behind and in front of some of the best athletes in the world.

This is the fifth article about the same event. It was fun to see and all, but this may be overkill.

I didn't get to watch the last couple WODs of Spealler's run and thus didn't learn Matt's name until now, but I often wondered that week who the poor guy was that everyone in the world was basically and unfortunately having to root against. I'm gratified to hear that he's a classic, classy CrossFitter who is very likely going to have his turn at the Games next year. 3-2-1-go, Matt Hathcock!

Matt AKA Long Trang is a class act. Love the kid, he will be back better than ever next year.

Matt will be back, and you will see him at the games 2013. He will still be a class act, and he will do what it takes to get there. He knows he just didn't have quite enough in the tank, but that will make it all the more sweet next year, knowing he earned it (just as Spealler said a few days ago). It will be great seeing him make it, I always enjoy seeing people who work their ass off getting rewarded for that dedication and work, heartbreaking to see him just short this year, next year will be a different story.