Azadeh Boroumand was all Pat Sherwood and Rory McKernan could talk about in the CrossFit Games Update show at the end of the first weekend of Regionals. She was the biggest story out of the South Central Regional, and Sherwood and McKernan delighted in pronouncing her name and reviewing her five first-place finishes.

During the individual men’s competition at the 2012 Southern California Regional, much of the attention was focused on Kenneth Leverich, Bill Grundler and Jeremy Kinnick. Meanwhile, Jon Pera spent the weekend putting in consistently strong performances and quietly took the first-place spot.

Boroumand and Pera have something else in common besides their humble attitudes and impressive work ethic: both have Iranian heritage. Boroumand was born in Iran and moved to a small town in Canada when she was 3 years old. Pera was born in the United States, but his father came to the U.S. from Iran at age 6. 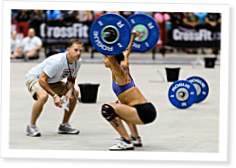 That's so awesome. I love readings stories like this.