On Episode 237 of CrossFit Radio, host Justin Judkins interviewed Brett Sepi, who is the coach and a team member of SPC CrossFit, the second-place team in the Affiliate Cup. The second half of the show features the 2012 Reebok CrossFit Games female champion, Annie Thorisdottir. This episode was webcast live at 6 p.m. PDT on Wednesday, Aug. 15, 2012.

The Words of Wisdom are The Three Rules of Goal Setting, by Greg Amundson, from the Goal Setting Trainer Course.

4:44 SPC CrossFit was in second place before the Leaderboard was wiped clean in preparation for the final day of team competition at the 2012 Reebok CrossFit Games. After the final Girls workout, the group was still in second place and secured a spot on the podium. Coach and team member Brent Sepi explained how the squad prepared for the Games and what it was like to compete at the Home Depot Center. Sepi detailed the history of SPC CrossFit and why it’s commonly referred to as “The Barn.” He discussed the different certificate seminars that are coming up at the affiliate and why it’s important to host those courses. Finally, Sepi gave coaching advice on how to handle different athletes and how to foster the right kind of community at your affiliate.

25:16 Fan favorite Annie Thorisdottir was crowned CrossFit Games champion for the second year in a row in July. She talked about her experience this year and described what she was feeling when Dave Castro announced that the competition would begin with a surprise swim-bike-run event. Thorisdottir detailed what she told herself after the Broad Jump event, when she was lower on the Leaderboard than she wanted to be. She explained what she does to deal with the pressure and why Despicable Me is her favorite movie, so much so that she watched it between events at the Games. She also talked about her life outside CrossFit and the likelihood that she will return to school and finish her degree. Thorisdottir closed by talking about her affiliate, CrossFit Reykjavik, and how it handles its 800 members on a day-to-day basis. 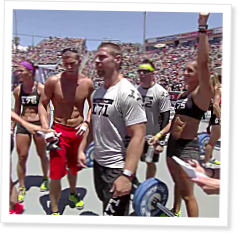