The goal of the CrossFit Games is to find the fittest man and woman on Earth. But when Kate Foster took the microphone and addressed the crowd at the Home Depot Center on July 14, it became clear that CrossFit is about something so much bigger than that.

The 13-year-old, who was diagnosed with leukemia last year, proudly marched to center stage at the Home Depot Center. A hush came over the crowd as the tiny girl with a prosthetic leg talked confidently in front of thousands of people about the importance of CrossFit for Hope, of donating to help children with cancer and other diseases.

The physical stature of the teen might have been tiny, but her smile, her confidence and the command in her voice were anything but.

“3, 2, 1 … Go!” Foster declared, as she officially opened a fresh year of CrossFit for Hope fundraising.

To help Kate and other children like her, visit Hope.CrossFit.com. 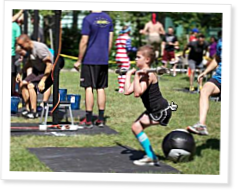 Going to Haiti: A Shift in Perspective

For five weeks this year, Emily Beers obsessed about the CrossFit Games Open—so much so that she became “a less-focused coach, a more scatterbrained writer, a more careless friend… Continue Reading

In February 2011, CrossFit Founder and CEO Greg Glassman and a group of CrossFit… Continue Reading

Emily Beers explains why CrossFitters are happier dating their own kind.

It all began when I started training a new client.

Kate,
if you read this, you're amazing! Keep up the inspirational work.

I love this side of CrossFit, and medicine.

You are awesome Kate. Truly an inspiration.

I wish you and your family all the best in the future. Keep up the good work!