On Episode 236 of CrossFit Radio, host Justin Judkins interviewed the fittest man in the world: Rich Froning Jr. This episode was webcast live at 6 p.m. PDT on Wednesday, Aug. 8, 2012.

The Words of Wisdom are from CrossFit Verve:
A Master Plan for Taking Back Control of Your Life by Tony Schwartz.

5:54 In July, Rich Froning Jr. won the CrossFit Games for the second year in a row. He came on the show to talk about his victory and what it meant to him to stand atop the podium for the second time. He talked about the competition and why it was important for him to leave no doubt about who is the fittest in the world. Not content to sit back and relax, Froning described why he’s hungrier than ever to win the 2013 Reebok CrossFit Games. The champ also explained what he did to celebrate his win and how soon he jumped back into training. A man of faith, Froning talked about his religious inspiration and quoted and explained his favorite scriptures. Finally, Froning gave an update on his affiliate, CrossFit Mayhem, and when he will have it up and running again. 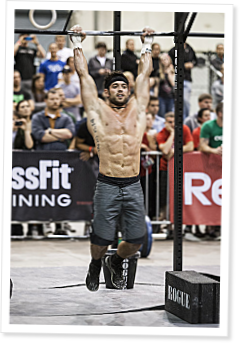