The Words of Wisdom are from an article titled Revisiting Hand Care, found on CrossFit Dallas Central’s site. The author gives advice on caring for ripped hands, preventing rips and maintaining healthy hands.

4:00 Valerie Voboril is no stranger to CrossFit competition: she placed third at the 2010 CrossFit Games, took 2011 off to have a baby and placed fifth at the 2012 Reebok CrossFit Games. Voboril spoke about the competition this year and talked about returning to training after having a baby. The SoCal athlete described how her training will differ this year and what weaknesses she’ll address, and she explained how she works mobility into her pre-WOD preparation. Finally, she described an upcoming event her affiliate is promoting to raise money for cancer research.

29:52 CrossFit Inferno owner and CrossFit Media personality Bill Grundler came on the show to give a report on the CrossFit Tour event that just took place in Big Sky, Mont. Grundler gave a rundown on some of the activities that made the event a success, and he described three things he learned that he will use to make his affiliate more successful. Sharing his own secrets, Grundler detailed how he uses social media to enhance his athletes’ experience, and he described how smart affiliate owners are using Facebook to connect their members and fire them up. Grundler spoke about CrossFit the sport vs. CrossFit the GPP program and how box owners need to maintain a balance for both types of athletes. He also gave his opinion on the value of open gym time and why he only offers it to his members once a week. 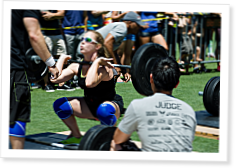