Christine Girard was the only Olympic weightlifter from North America to win a medal at the London Games, and she fired up the Canadian CrossFit community in the process. Emily Beers reports.

When Christine Girard placed fourth at the Beijing Olympics in 2008, people treated her as if she had failed.

“People reacted like it was a huge disappointment because I didn’t win a medal. It was as if they were saying to me, ‘You’re almost good,’” Girard said of her fourth-place finish in Beijing.

Now that Girard has an Olympic bronze medal around her neck, reaction to her recent Olympic performance at the London Games has been night and day.

“It’s been a world of difference, yet it’s only one ranking higher. After being third this time, people talk to me like I won the gold. It’s amazing to see how different their reactions have been this Olympics,” said the 62-kg lifter.

The other thing that was different in London this summer—whether Girard knew it or not—was that she had an entire community diligently watching her from home and admiring her lifts from afar: the CrossFit community. 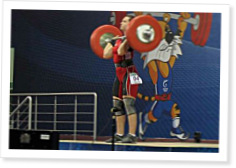 In B.C., Canada, 71-year-old Dieter Stamm invests in the sport of weightlifting and the young athletes he coaches.

Analysis of the Transition

Joe Westerlin, owner and head coach at CrossFit Omaha, leads a group class on the push press, correcting a multitude of errors along the way.

Coach Mike Burgener is one of the top Olympic Weightlifting coaches in America. In this clip from his CrossFit Oly cert on May 24, 2008, he analyzes the transition from the… Continue Reading

I remember watching Christine live during the Olympics, and hearing her coach (and husband I believe?) yelling "Weight in the heels!!!" from the sides ;)

Crossfit definitely made me develop an interest in olympic lifting that I didn't have before.