Bill Starr explains how to incorporate isontonics and isometrics into your strength program.

The isometric concept was the brainchild of Dr. John Ziegler, a general practitioner from Olney, Md., who specialized in physical rehabilitation.

Isometrics, along with the more advanced combination of isotonics-isometrics, swept across the country almost overnight. Then in the mid-’60s, the isotonics/isometrics bubble exploded. Word had finally leaked out that along with the rack training, several key athletes were taking an anabolic steroid. Doc Ziegler was behind this innovation as well. When he learned that Russian Olympic lifters were experimenting with male hormones, he dug in the research and ended up developing a little pink pill, which he took to CIBA Pharmaceuticals. That’s how Dianabol was born.

The isometric craze came to a screeching halt. It didn’t matter what kind of routine lifters used just as long as they were using Dianabol. The consensus was that the rack training had been nothing more than a smokescreen. Many believed it was the drug that made the only difference, and almost overnight isometric training in any form was abandoned—except for one group of lifters: those at York Barbell. They continued to use the isotonic-isometric routine. Why?

Because they knew the system brought results. 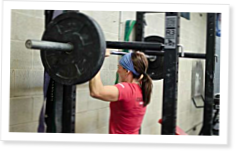 Warm-Ups, Flexibility and the Olympic Lifter

If your pre-workout prep consists of a cup of coffee and a few squats, Bill Starr has some advice for you.

6 Comments on “Short and Simple—and Effective”

Thank you Crossfit and Mr. Starr for teaching us the old school forms of training!

Does anyone know where to find a list of iso exercises I can use?

Great article! I've been CrossFitting for for almost 8 months now and while I've lost 25 pounds, increased my speed and improved my work capacity, I'm not any stronger. I've thought about adding back my old (boring) 3 sets of 10 free weight routine, but this looks like a far more efficient (and interesting) way of accomplishing my goal. Thanks!

Hi my question is "are you doing strength wods?" How much are your 1 rep maxs? Dead lift, squat, clean?

find your 1 rep max for these exercises then work out with 70%-90% of you 1RM.
do this 2-3 times a week.the pecentage workouts not the 1RM's. do the 1RM's like once a month and record your progress.

Get a good warm up, warm up all joints and do a few empty bar practices.
Burgener warm up is best.(find on youtube)
Do like 3-5 reps of an exercise, go a little heavy.
do 5 sets with 2-3 mins of rest in between.

No, I've just been doing the WODs on the board at my box, which are mostly met-con'ish. M 42 y/o 205# (down from 230#) DL-290#, Clean-140# BS-don't do 'em anymore. I've improved in other areas; mobility, endurance, etc., but I feel like I'd like to do something heavier, but this isometric stuff looks like it would be good for a few reasons. The biggest is because I'm always sore somewhere from the other WODS and doing strength training without going through full ROM is an attractive option because I'd be doing it in addition to, not instead of, my current workouts and injury is always in the back of my mind. Thanks for the feedback.