Bob Takano goes over the finer points of cueing lifters in training and competition.

Coaching cues are a form of communication that can be unique to a particular coach and the specific situation. They are in fact abbreviations of concepts that would take a great deal of time to explain.

They can and should be used in the early developmental period as technique is taught, and they can be of even greater value during competition when there is a need to quickly focus on a specific point of technique while the competition clock is winding down.

We’ve all seen coaches at local competitions calling out a variety of cues, certainly too many to be properly assimilated by the lifter on the platform. It might also be noted that the same assortment of cues is used for every lifter coached by a particular coach. It is altogether possible that they all are in need of the same cues because the coach is emphasizing the same points with all the lifters on the team. Another consideration, however, is that the coach is simply using the coach’s station as a means of attracting attention.

If a coach has performed coaching in the most effective manner, there will be almost no need for any action other than a very few cues—or none at all. I mention this because there were all too many coaches shouting out unnecessary cues at the recently concluded London Olympics simply because it was the Olympics and the cameras were rolling. 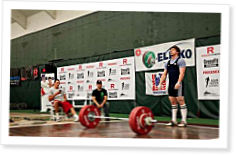 12 Tips for Coaching O-Lifts in the CrossFit Box

Hall-of-fame Oly coach Bob Takano has nearly four decades of coaching experience. He offers some advice for CrossFitters who will be teaching the quick lifts to their athletes.

Bob Takano recommends five drills perfect for anyone learning the snatch and the clean and jerk.

Preparing for the First Olympic Meet

You just cleaned a huge weight—but can you get it overhead? Hall-of-fame Oly coach Bob Takano explains how to correct errors in your jerk.

In the CrossFit community (and in the… Continue Reading

You only get six chances to make a lift at an Oly meet. Bob Takano details how coaches and athletes can prepare to get optimal results on the platform.