“There’s a situation for weightlifting now that has never existed in the 20 years that I’ve been in the sport and that is due to the CrossFit explosion,” said Ursula Garza Papandrea, a senior international USAW coach and technical director of the organization’s board of directors. 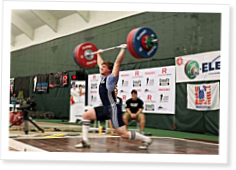 I wish some of the strict olympic lifting individuals who like to bash us CrossFitters for oly lifting could see this. Same team! We support each other, we all win. More money being driven into both of our sports will only make everything better and more accessible for us all.

In Australia, the Australian Weightlifting Federation (AWF) has been extremely supportive of CrossFit for over over 6 years now by providing constant access to education courses and sponsoring events. In early 2012, the AWF was a major contributing financial sponsor for an event that CrossFit Brisbane hosted that for the first time included a Weightlifting Competition for invited Elite CrossFitters and Weightlifters on the same platform under Weightlifting rules. It was a huge success and drew a large crowd of spectators. AWF CEO Michael Keelan has always welcomed the CF/WL relationship and has worked hard to help CF in Australia participate in the sport of Weightlifting, and deserves special mention for his ongoing support.

There is no doubt that CF has been a great boost for the sport of WL, but we should also keep in the forefront of our mind that CF has inherited great legitimacy by being able to draw on the Weightlifting as a foundational part of the program.

Much work has gone on in the background to bring the sports closer together, and I hope both sports continue to prosper by the relationship. The enemy of the relationship is the labelling of people as Weightlifters or CrossFitters. At what point can a CrossFitter be considered a Weightlifter? ... is it at a particular percentage of the world record? is it when they lift at a competitive WL event under WL rules? Is it when they have an accredited WL coach or train at a genuine WL gym? When should a weightlifter be considered having crossed over to being a CrossFitter? ... if they do Metcons for conditioning work are they a CrossFitter? If a WL coach is privately coaching CrossFitters on how to do a better Grace time are they becoming a CF coach? The reality is that labels are artificial and not helpful. I have heard some in the WL community describe CFers as people who like training but don't know how to lift properly. I have heard some in the CF community describe WLers as pople who know how to lift but aren't fit. But, I know CFer's with exceptional WF technique and big numbers and I know WLers that are fit and love metcons.

Perhaps there is just one category ... people that love lifting weights ... and then simply many ways of expressing it, with CF being one and WL being another. Both sports respect virtuosity and that should be our common ground, bound together by the best examples of our respective sports, not the worst.