A feeling of helplessness tormented most Americans in the wake of the school shooting at Sandy Hook Elementary in Newtown, Conn. In the face of so much horror and injustice, some argued for more gun control, while others called for a heavier gun presence in our schools. Many brought up the need for better mental-health services.

Our country has been locked in debate on these issues for years. Change, if it comes at all, will be slow and incremental. While we wait, is there anything that can be done to make our children safer? Can the average person defend him or herself against a determined killer with gun?

When Nidal Hasan opened fire on the Fort Hood military base in 2009, he killed 13 people and wounded 29, many of them members of Lumberjack CrossFit. Military personnel attempted to stop Hasan but were shot and killed in the process. How can we expect our teachers to do better?

There are no easy answers, but there are some strategies that can help.

CrossFit works with two experts who teach civilians, military personnel and law-enforcement officers how to deal with attacks. Tony Blauer, the self-defense expert who runs the CrossFit Defense course, has spent his career teaching fear management and personal-defense readiness through his company, Blauer Tactical Systems. George Ryan, a full-time SWAT officer and creator of the CrossFit Striking Trainer Course, has been teaching law-enforcement officers around the country about proper responses to active-shooter incidents since 1999.

Both Blauer and Ryan think there are things we can do. And they say the CrossFit mindset is an important piece of the puzzle. 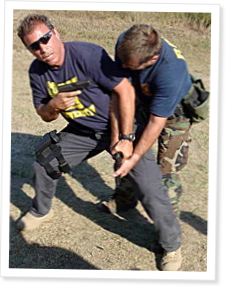 Veteran and affiliate owner Atom Ziniewicz struggled with post-traumatic stress disorder, depression and bipolar disorder. He ultimately lost his battle, but he fought with his CrossFit… Continue Reading

What does it take to write a book? Hilary Achauer talks to Samir Chopra and bestselling novelist Eleanor Brown about the joy—and pain—of writing.

When all she wants to do is stop, Eleanor Brown… Continue Reading

9 Comments on “Face the Fear: Lessons From Newtown”

GREAT article.
Now, if I just had a clue what my kids' school's plan is... From observation and inquiry, I have yet to see anything other than the usual placement of one's head in the sand..

Excellent article. I'm of the opinion that self-defense should be a mandatory class in school, just like math and science. How often has your personal safety, or the safety of a loved one, come down to whether you could solve a math problem or describe the anatomy of a plant? Now on the flipside, how often (or at least how likely) is it that you saved your own or the ass of a loved one with self-defense techniques? This goes deeper than just hand-to-hand combat. It's an entire mindset.

Thank you George Ryan and Tony Blauer for your desire to share your professional knowledge and expertise with others. You are truly providing a service. George Ryan's quote, “Dealing with fear, coping with panic and taking action in a crisis are essential life skills—not just school-shooting skills," is impactful and an important message to carry with us.

This article is phenomenal! As a law enforcement officer I agree with everything written and stated. It is important that our society learns to become more proactive in the face of evil and not wait until a tragedy occurs to then see what can be addressed. Both George Ryan and Tony Blauer expressed that perfectly in this article. Education and planning will lead to the success and safety of our schools and society. Thank you for sharing those views. Hopefully people will listen and ACT!

Many Thanks for your kind words. That was really nice of you.
I would also like to take this opportunity to congratulate Hilary Achauer for writing an outstanding article and Tony Blauer for his knowledge and expertise. It was great working with both of you.

Be Safe and Godspeed!
George

Are there special considerations for kids self defense course or could a regular self defense instructor teach one? Around the Marine Corps there are a lot of MC Martial Arts instructors, but I would hesitate to have those guys teach kids without instructions on how kids are a little different... What do you think George and Tony?

Hello Kathryn!
Many Thanks for your question. Children do learn differently from adults, especially because they have shorter attention spans. An instructor must frequently change the activity to keep the kids engaged. They also will need more repetitions and practice before remembering a lesson well. When it comes to teaching them self protection, the instructor also must make the lessons age appropriate. But, the most important part of kids self-defense training is to encourage the children to be leaders so they won't hesitate to make good decisions when faced with any type of adversity.
Best of Luck and Godspeed!
George