This three-part series profiles Julie Roberts and her work in Haiti since a devastating earthquake in 2010. From amputating infected limbs to investing in pay-it-forward microcredit loans, Roberts is dedicated to helping Haitians recover.

It is January 2010. Julie Roberts finishes a long run in training for the Vancouver Marathon and rushes home to cook dinner for her four children.

She turns on the TV to find ubiquitous breaking news about a devastating 7.0-magnitude earthquake that just hit Haiti, the poorest country in the Americas. Because of poorly built infrastructure, buildings crumbled like sandcastles, taking tens of thousands of lives in the process. The death toll is rising with every second. It will eventually number more than 200,000.

A part-time paramedic, Roberts feels a sudden obligation to help, and not in the dollar-a-day-sponsorship-program kind of way. Ten minutes and CA$1,000 later, a flight is booked for the following morning.

On the plane she’s a bit nervous. Planes aren’t landing in Haiti because of the earthquake, so her flight is actually touching down on the other side of the small island, in Santo Domingo, Dominican Republic.

Roberts is not exactly sure how she’s going to cross the border into Haiti, but she’s confident she’ll find a way to get to ground zero.

Parts 2 and 3 will take an in-depth look at Roberts’ efforts in Haiti. 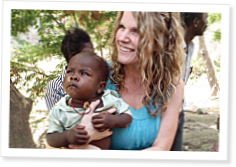 The final part of this three-part series looks at the day-to-day lives of Haitian people and how they find happiness in a country filled with constant physical struggle and hardship.

One year ago, Julie Roberts funded five microcredit loans to five struggling families in McDonald, Haiti. In Part 2 of this three-part series, Emily Beers takes a look at how Roberts’ seeds… Continue Reading

The goal of the CrossFit Games is to find the fittest man and woman on Earth. But when Kate… Continue Reading

This is an amazing story. I look forward to the stories to follow. I'm now inspired to help in some way at some point in my life, hopefully sooner than later.

I was checking stuff in Youtube and I found your video. It was amazing. I am from Haiti, now living in Edmonton.