The Ex-Fittest Man on Earth by Dave Leys - CrossFit Journal

The Ex-Fittest Man on Earth

Dave Leys started doing CrossFit in 1999. In the years that followed, his best Fran time of 2:50 was among the best in the world. Leys was also featured in many of the very first videos to appear on CrossFit.com.

“He’s one of the fuckin’ OGs of CrossFit and just like crushin’ it back in the day,” says Dave Castro, Director of the CrossFit Games. “No one could keep up with him back in the day.”

Today, Leys, also known as “DMFL,” is a videographer at CrossFit Headquarters in Scotts Valley, Calif. More recently, he filled the role of video journalist during Regional season.

“I’m learning that you have to try not to be too worried about hurting someone’s feelings … (and) realize that you’re the eyes and the ears of the world,” Leys says. “That’s a process.”

He adds: “Good videos are hard to make.”

“That’s not me—to go and talk to people, especially when they don’t want to be talked to,” Leys explains, “it’s something I’m learning … I don’t think I’ll ever get used to that.”

And in the gym? Leys is still training and finished 166th in the Northern California Region of the Open. 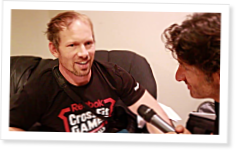 “CrossFit Has Helped My Healing Process”

By Jennifer and Vidal Lazo

Steve Longan was worn out on working out, so he started running with the other guys at the Los Angeles County Sheriff’s Department Special Enforcement Bureau. But running wasn’t… Continue Reading

After a motorcycle accident involving another motorcycle, Jennifer Lazo was left with a compound fracture of her tibia, which was missing two inches, and a fibula that was cracked in half.

Glassman on D.C. Licensure: “They Want to Control You”

In late July, CrossFit Founder and CEO Greg Glassman traveled to Washington, D.C., to discuss licensure regulations for personal trainers in the District. He met with city-council representatives and others… Continue Reading

Everyone has a different reason for doing CrossFit. For Pat Sprague of Cascade CrossFit in Washington state, CrossFit is about camaraderie and self-improvement.

“The beauty of it to… Continue Reading

3 Comments on “The Ex-Fittest Man on Earth”

First time I have heard of DMFL.
I like him he seems like a cool chill guy.
I really hope him all the best.
hope to see him more at this years games.
he is a interesting character

I love you Dave! You are a true warrior and one of the best athletes I have ever known. Thank you for pushing me to be my best during our old Team 6 training days. - Greg.

Hey Dave!
It was great meeting you at CrossFit Amundson. Thank you for all of your help with taping our workout.

Also, Best of luck with competing and with CrossFit Media.