Joel Salatin is possibly the most influential farmer in America.

He doesn’t work for the U.S. Department of Agriculture. Calling himself a “lunatic,” he’s most famous for his central roles in Food, Inc. and The Omnivore's Dilemma, as well as several speeches on the TED stage. Salatin abhors many commercial farming practices, concerns himself with “the pigness of the pig” and says the “organic” label is a scam.

He calls his methods, among other things, “exercising ecology.”

“Isn’t it incredible,” he asks, “that the people who put Froot Loops and Pop-Tarts at the base of the food pyramid, who tell us that feces in our food is OK as long as it’s irradiated, that GMO food is safe but raw milk isn’t—these are the people in charge of our food?”

They’re also the people in charge of food labeling, and according to Salatin, the “organic” label just ain’t what it used to be. 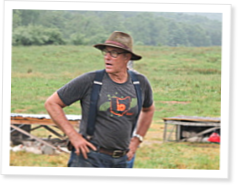 You can lead a man to water, but you can’t make him drink. Add sugar, salt, artificial flavors and a good story, and he’ll… Continue Reading

Fat of the Land: Mismeasures and Missing the Point

What Should We Eat—and Why?

Dr. Lon Kilgore finds a numbers game at the heart of the obesity epidemic.

Gary Taubes and NuSI aim to correct a decades-old problem by telling the world what to eat—and backing the recommendations up with real science. Marty Cej reports.

8 Comments on “The Lunatic Farmer ”

I love Joel Salatin! I applied last year for the summer internship for this year but didn't get excepted. I'm hoping to get down there in September for the Farm To Consumer Legal Defense Fund, fund raiser. Great article. Crossfiters need to learn that food quality is more critical than both Paleo and The Zone.

I really wish this article weren't so hard on the "organic" label. Clearly labeling foods "organic" provides a valuable method of quickly and clearly identifying items that are more expensive than the items next to them.

Richard- I'm not sure I understand your comment. Are you saying the article isn't true? Or simply that you "wish it weren't" true? The label is only valuable to the extent that the term has meaning. I think the article is pointing out that the term - as it is defined by government - doesn't mean what you or I (or the average consumer) think it means. I don't think the label "organic" is supposed to be a price identifier - but it has become that as much as, or more than, anything else.

Fascinating article. Makes me wonder how we can find local farmers for those of us who live in more urban areas. Is big farma the only answer for large population centers? Interesting questions, to me.

Great Article! and Dale I think (I might be wrong) that Richard was speaking tongue in cheek.

I thought the article was very interesting. I think Mr. Salatin's farming methods look like a sensible approach to making nature work for the farmer instead of constantly barraging the land with man-made products of questionable safety. The organic label, on the other hand, is completely useless in my mind (a "scam," to use Mr. Salatin's words). Thus my comment, in which I was trying to imply that I find the organic label's most useful function to be quickly identifying which products are overpriced. (So, gold star to Glen for spotting the sarcasm despite my less than stellar delivery.)

$30 per person, 100 people/day. That $15000/week for 5 days/wk. $60,000/month just from tours. If every small farmer could make money like that then many more would be able to be more sustainable and slow down the process.
He's making a killing off city folk.

When I visited it was free. Of course this was 5 years ago, and I left with a cooler full of delicious meat. If he didn't charge anything it would become a burden on the farm.

I had the chance to go to a two day seminar on Polyface Farms 7 or 8 years ago. It was great to see how the farm was run and talk with the interns about what they'd been doing and learned while there. This was also the time where I got to see what it meant for cows to, "kick up their heels and run," when their fence was opened up and they got to move onto the next grazing spot.

As to the tours, Polyface Farms only offers them twice a month, so they're hardly making a killing on them. They also have an "open door" policy where anybody can visit at any time and look at any part of the operation with no charge.

Moneywise, the last time I looked, Salatin was estimating that he was making $10-15,000/acre/year used for chickens and around the same for beef. 100 acres in use would gross $2-3,000,000 a year. That definitely enough to keep a small farmer in business even with costs.

Finally, like Nathan, my wife and I left a freezer full of the best beef, chicken, pork, and rabbit that I've ever had before or since. Maybe wagu beef, but it's a close call. The meat simply tastes like it should.