Training in the Heat by Bill Starr - CrossFit Journal

Training in the Heat

This is the time of year when athletes have to deal with temperatures soaring close to or over the century mark, as well as extremely high humidity in some areas. It’s also when many sports teams train for the upcoming season.

Extreme heat can be debilitating to any athlete, regardless of age, if he or she does not take the proper precautions. Even very fit athletes have succumbed to the effects of the sun when they ignored the signs and continued to push through a planned session. The main reason most end up on the short end of the stick is they just do not take the time to do what needs to be done when the temperature soars.

The majority of athletes who attempt to train as usual in hot weather don’t end up passing out, but they do end up completely exhausted from a workout that was a piece of cake when the weather was milder. Many of them stop training when it’s extremely hot and voice the intention of starting back up once cooler weather arrives. This is not the right way to deal with the problem. Instead of ceasing training, athletes should make some adjustments and use some common sense.

It’s essential that you know just what to do when you’re faced with a workout in a hot, humid gym or under a blazing sun. It’s not just a matter of having a productive workout; it’s actually a heat issue. Heat can put you down for the count if you don’t adhere to some rules. 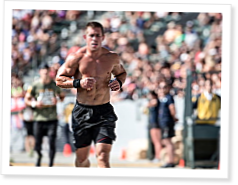 CrossFit Football: Teach Athletes to Be a Bullet in a Gun

According to CrossFit Football trainer Raphael Ruiz, the No. 1 goal of a good football strength-and-conditioning program is to increase speed. The No. 2 goal is getting athletes to… Continue Reading

It was Super Bowl week in… Continue Reading

A homeless high-school dropout with a felony charge and a son, Damian Relierford now has a football scholarship and wants to help kids like him. Andréa Maria Cecil reports.

Muscle damage may increase risk of heat stress. And it looks like exercising in heat may also increase muscle damage. Just something to think about when you are training in the heat. Its starting to get hot.