One Baby at a Time by Andr&#233;a Maria Cecil - CrossFit Journal

When first responders arrived, they determined it was too late. They couldn’t save her. So the officer, who later became the chief of the Miami Police Department, reached down into the water and held the baby’s lifeless hand until her little body was pulled out.

Sharing the story reduced the man to tears.

“It’s the worst thing that can happen to people,” Glassman said.

The Founder and CEO of CrossFit Inc. is the father of five. Via a partnership with Infant Swimming Resource, CrossFit Inc. hopes to prevent such tragedies.

On the night of Sept. 20, Glassman and CrossFit HQ employees were among those at Hotel Paradox in Santa Cruz, Calif., to witness one woman’s efforts in teaching local children how to save themselves when they fall in water. 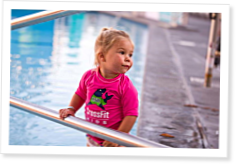 Nearly all at their… Continue Reading

By Shirley Brown and Alyssa Dazet

Few kids like sushi. It’s raw and cold and fishy.

But if you substitute in food your kids love to eat, you’ll get sushi that won’t make them squirm!