Exercise Is the Drug by Chris Cooper - CrossFit Journal

“I’ve been doing CrossFit competitively for five years,” Glass says. “I’ve been doing cancer research since 2001. I know CrossFit has done so much for my life, and along the way I’ve met so many people that have been dealing with cancer treatment and finding CrossFit. They’ve done so well, and I thought, ‘There’s a conversation I’d like to start.’”

While working on vaccines for breast cancer at Duke in 2008, Glass found the work of Dr. Lee Jones, who was beginning to study the clinical use of exercise on cancer patients. Jones’ work has been published in the scientific press and widely cited by popular media since 2008. While other cancer researchers were focusing on important drugs and delivery systems, Jones wondered if exercise could help a patient absorb the drugs better or survive longer after chemotherapy.

“Right now we’ve been using therapies for cardio diseases in cancer patients,” Glass said. “But in the future it may be proven that mixed-modal training, like CrossFit, elicits the greatest effects. We just don’t know yet.” 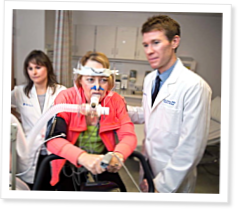 In Memory of Sarah

Catalyst Fitness sees one of its members die from a brain tumor and re-dedicates itself to exercise for the benefit of the brain. Chris Cooper explains.

Chris Cooper talks about multiple sclerosis and how trainers can try to help athletes with the disease.

5 Comments on “Exercise Is the Drug”

Yes! Excellent! I'm glad somebody is doing research in this area! I have wondered ever since the video posted about Sharon Lapkoff and how she beat osteoporosis with Crossfit, I have wondered if anybody has looked into the effect of Crossfit on cancer. I see your article includes excercising as a means to maintain respiratory capacity, but based on Sharon's results and her ability to increase bone density while crossfitting, I wonder if crossfitting during cancer treatment could be used to get the bones developing more density to counteract the bad "blasts" that are developing as a result: thinking of leukemia in particular. It would seem to me like there could be a positive effect if you can get the body making good cells. Jane Foster's success at battling leukemia makes me think of this possibility as well. Just my thoughts.

I was very fortunate to work at a research center at UNC Chapel Hill doing research on exercise for breast cancer patients. It is amazing what it does for these women. Anyone with friend/family going through treatment needs to look into this to combat the horrible side effects of treatment. See my article on the research behind this (http://activeptblog.com/2013/11/12/exercise-for-women-diagnosed-with-breast-cancer/) WFS

Thank you for sharing this great research! We seem to be just scratching the surface on the impact of exercise!

Good article on an important topic!
By the way, just to put this out there, Eric Durak of Medical Health & Fitness has done a lot of research on Cancer and Exercise. Check him out, seriously, here: http://www.linkedin.com/pub/eric-durak/4/194/a33

I was in a seminar of his years ago to learn more, directly, about this topic, and I can tell easily that he really cares about exercise and its effects on Cancer patients. Of course, no one has all the answers yet, but I would imagine he would be a legit and potentially valuable contact person for Mr. Glass to talk and have a meeting in some way. Shared information makes things better!