Bodybuilder Coco Kissack shares her story of a dark descent into the world of steroids and side effects. Maureen O’Hagan reports.

At first, her vision started to go. There was blurriness and vertigo. And everywhere she looked, there was a floating spot.

She was putting on weight, watery, puffy weight. She was just plain uncomfortable in her clothes, and she sweated right through them. That was new. Meanwhile, she was losing her voice.

“I convinced myself it was the air conditioning,” she recalled.

She felt angry. Aggressive. Completely lacking in patience. One by one, Coco Kissack brushed each of these problems aside. The vision? It must be her mascara, or perhaps she needed a new prescription from her doctor, she thought. Her short fuse? Purely situational—a temporary problem caused by life’s upheavals.

Kissack bought new mascara. Her symptoms continued. She got a new prescription. Nothing changed. Finally, a doctor told her she had central serous retinopathy, a disease that is associated with steroid abuse. He looked at her bodybuilder’s physique. Was she using?

The truth is, she was. But Kissack simply didn’t believe the drugs were causing her problems. 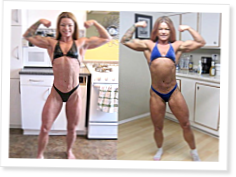 The End of Tolerance

Consortium for Health and Military Performance and American College of Sports Medicine Consensus Paper on Extreme Conditioning Programs in Military Personnel: An Answer

CrossFit questions the leadership of the fitness and exercise-science communities.

“Consume the maximal amount that can be tolerated.”

The line seems innocuous at first, just a recommendation in a 1996… Continue Reading

CrossFit is based on measurable, observable and repeatable results, and extensive data support the safety, efficacy and efficiency of the CrossFit method. Criticisms of the program, however, are seldom… Continue Reading

This brought tears to my eyes! Powerful, moving and enlightening story. This information should be made widely available. Thank You CF Journal!

Steroid use is quite common ... and "natty" bodybuilders are in denial. Simply Google the dude Bostin Loyd (ignore his relative d-baggery); the sport will run folks like this out of the gym as a pariah.