Pros, Joes Team up for TAPS

District CrossFit sits just two blocks away from the Naval Sea Systems Command in Washington, D.C. So when a lone gunman fatally shot 12 people and injured three others on the base on Sept. 16, 2013, operations at the box ground to a halt.

“When it happened, we got, like, literally shut down. We weren’t allowed to leave or do anything. It was really scary and … it just kind of hit home,” said affiliate owner Andrew Killion.

Because of the close ties between gym and base, the affiliate created the District CrossFit Charity Pro-Am, in which Games athletes were paired with “mortal” CrossFit athletes, Killion said. The event benefitted the Tragedy Assistance Program for Survivors (TAPS), which provides help to bereaved families of those killed while serving the military.

Jones, who now lives in Texas, used to train at District CrossFit.

“The Navy Yard shooting affected a lot of these athletes, and (I wanted) to come back and just kind of help build something with them, hopefully, that can be a yearly thing,” she said. 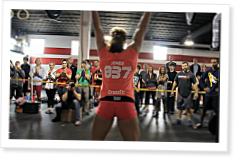 The People of CrossFit Jozi

Imtiaz Desai is the owner of CrossFit Jozi in Johannesburg, South Africa, but his CrossFit roots started in New Zealand when he was there for graduate school. When he returned to Johannesburg, he… Continue Reading