At Cairo’s lone CrossFit affiliate, athletes sweat out the stress of living through the Egyptian Revolution. Bryan Anderson reports.

Adham Salloum, 26, is standing inside a health club on the edge of Cairo, Egypt. He grabs a pair of gymnastics rings and heaves himself up.

A dozen of his comrades are standing around him. They clap and they shout, urging him on: “Yalla, Adham!” (“Yalla” means “come on” in Arabic.)

He pulls on the rings again and hoists himself up 13 more times. By the 14th rep, the veins in his neck are bulging. He lifts himself up again, then lowers himself down, collapsing on the floor. Another round of applause erupts. The other athletes pull him to his feet, and minutes later he’s resting on the grass outside, grinning.

This is CrossFit in Cairo, where over three years of political turmoil and security chaos, a small group of athletes have forged a family-like bond based on their shared passion for “going hard” in their training. Through daily protests, street violence and a military curfew, the athletes have committed to CrossFit.

“It’s almost like a civil war,” says Ramy Saleh, a tennis coach who brought CrossFit to Egypt in 2011. “People are looking for an outlet from what’s going on around them.” 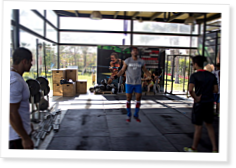 It was well past 1 a.m., and darkness blanketed the city of Derry, Northern… Continue Reading

Love the huge poster of Stacy Tovar in the background. I wouldn't expect to see that in Egypt. Awesome!