2:30 Anna Tunnicliffe spoke about her decision to retire from the sport of sailing, in which she won a gold medal at the 2008 Olympic Games in Beijing, China. She also explained why she moved from Miami, Fla., to Pittsburgh, Pa., and how her life has changed. She detailed why you need to be fit to succeed in competitive sailing, and she talked about how some of the lessons she learned on the water can be applied to CrossFit. As a top athlete, Tunnicliffe gave advice to athletes gearing up for the CrossFit Games Open.

15:30 Christy Adkins (formerly Phillips) competed in the CrossFit Games for the fifth time in 2013. She walked away with a seventh-place finish and said it meant a lot to her given that the level of competition has improved so much since her first appearance. Like Tunnicliffe, Adkins offered several tips for athletes who are training hard for the Open, and she gave advice to Open competitors who might be under the eyes of a judge for the first time. With top athletes pushing the limits of performance higher and higher, Adkins explained how optimizing recovery is a key element of her training plan. 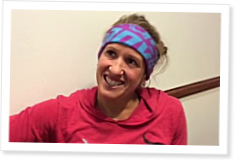