CrossFit athlete A.J. Kemppainen will take to the air as freeskiing is contested for the first time at the Olympics.

Freeskier A.J. Kemppainen grew up on skis. Raised in the ski-resort town of Ruka, Finland, Kemppainen has done most of his skiing under the dark sky in the wintertime. When he moved to Helsinki last summer, he found CrossFit Basement. He said CrossFit training helped prepare him physically and mentally, and he continues to do stretching and mobility work while competing.

This will be the first time skiers launch out of the halfpipe at the Olympics, and Kemppainen will be front and center. Ranked among the top contenders for a medal, Kemppainen won a World Cup event in August in New Zealand. 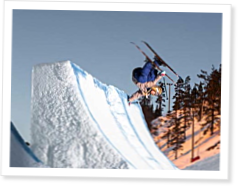 American Ninja Warrior brings sudden fame to previously unknown parkour athletes and freerunners who are only in it for the love of the sport.

Are athletes made… Continue Reading