Former and current Olympians talk about the evolution of skiing and snowboarding at the Winter Olympics. Equipment and training have changed, but the love of competition remains constant.

In Sochi, Russia, freestyle skier Keri Herman will represent the United States in her first Olympic Games. She’ll compete in the slopestyle competition, and it’s the first time the event will be included at the Winter Olympics.

Herman’s been training hard on and off the slopes for four years, and when the competition opens, she’ll perform complex tricks and jumps on “twin-tipped skis” that allow her to ski facing forward or backward.

Stefan Kaelin raced in the slalom and giant-slalom events in stiff leather ski boots at the 1964 and 1968 Olympic Games. It was a much simpler time, an era before before halfpipe, ski-cross, snowboarding and slopestyle events even existed. His training was seasonal and didn’t include dryland sessions or the special programs used today.

Separated by decades, Herman and Kaelin both do CrossFit, as do 2002 snowboard bronze medalist Chris Klug and 2010 and 2014 snowboard Olympian Sarka Pancochova. Although winter sports and elite training have changed drastically since the 1960s, the Olympic spirit has largely remained the same. 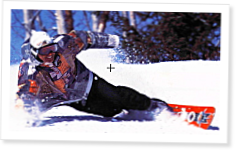 “It was hard to get everything down,” he says.

But after a month, he changed his mind.

Headed to the Olympics: Erin Cafaro

A Second Chance at Life

In 2007, Erin Cafaro had been rowing for three years and had been on the U.S. national team for a year and a half.

The next year was an Olympic one, and Cafaro needed to get stronger. Through… Continue Reading

Chris Klug is a retired professional snowboarder who is a three-time Olympian and winner of a bronze medal at the 2002 Olympic Games in Salt Lake City. He’s also a CrossFitter out of Aspen… Continue Reading