The Flash of the Blade by Emily Beers - CrossFit Journal

The Flash of the Blade

As speed demons on skates carve up the ice in Sochi, Emily Beers explains the differences between short- and long-track speed-skating events.

One of the most famous medals of the 2002 Salt Lake City Winter Olympic Games was Steven Bradbury’s iconic gold in the 1,000-m event on the short track.

During his semifinal, Bradbury hung out behind the other skaters because he knew he wasn’t as fast. When three other competitors crashed, Bradbury glided to the line, finishing second and earning a spot in the final. In the race for the medals, Bradbury again hung out behind the pack, and when all four other athletes ended up in a pile, he avoided the crash site and cruised to Olympic gold.

Bradbury’s improbable victory had a lot of people shaking their heads and comparing short-track speed skating to a roller derby on ice. And many others who watch long-track races once every four years don’t understand the effort required when hunched-over athletes employ giant quads to cruise around the track at speeds over 40 mph.

With both the short-track and long-track competitions in full swing in Sochi, Russia, speed-skating expert Barry Publow takes a closer look at the finer points of both disciplines, dispels common misconceptions and talks about how high velocity on ice relates to inline speed skating. 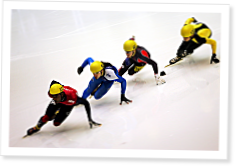 Gillian Mounsey finished 3rd overall in the 2008 CrossFit Games. She had been training CrossFit specifically for only 12 weeks. But, as we find out in this profile from Again… Continue Reading

On Episode 371 of CrossFit Radio, host Justin Judkins interviewed the athletes atop the CrossFit Games Open Leaderboard after workouts 15.1 and 15.1A: Maude Charron and Nick Urankar… Continue Reading

SO tired of people's incorrect opinions on muscle physiology being stated as fact. It is true that because the muscle is undergoing an sustained isometric contraction blood supply is shut down to the muscle, and metabolites (which include potassium, CO2, lactate and a bunch of others) do build up. But it is not lactate that causes pain or muscle burning. That is old school doctrine that sticks around solely because people find it easy to associate "burning" with "acid". Lactate acid is readily used as a fuel source by muscles working at a low intensity and does not cause pain or muscle damage. As best as exercise scientist can tell it is the build up of potassium that causes the burning feeling.