The Need for Speed by Emily Beers - CrossFit Journal

Comedian Jerry Seinfeld does a stand-up routine about the Olympics and makes fun of the sports of bobsled and luge.

“The luge is the only sport I’ve ever seen that you could have people competing in it against their will and it would be exactly the same,” he said.

While Seinfeld’s satire would likely offend some bobsled and luge competitors, former Canadian bobsled athlete Mike McCorkell might not be so quick to judge the comedian.

McCorkell had never been in a bobsled before when he was invited to Calgary in the summer of 2009 to try out for the Canadian National Team. He was put through a series of tests involving weightlifting, sprinting and pushing a sled. He returned home to British Columbia after the tryouts and carried on with his life.

“And then one day, I got a message from one of the national-team pilots asking me if I could come up to Whistler for two weeks and push a sled,” McCorkell said. Two weeks later, he was named to the Developmental National Team.

In short, bobsled is a sport where you can wake up one morning never having raced a bobsled and go to bed that night labeled an Olympic hopeful. 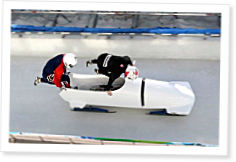 Hobart at the Hybrid Challenge

Generally, Olympic weightlifting is thought of as an individual sport… Continue Reading

“I am a competitive bodybuilder. Marathon workouts of each body part, attacking every muscle with 30-40 sets. Three hours of aerobic activity each day. Manipulate water and sodium until I was ripped… Continue Reading

Rob Orlando is a CrossFitter and strongman competitor, so he’s the first to tell you an 800-lb. deadlift doesn’t mean much if you can’t do pull-ups or double-unders.

Orlando is the owner… Continue Reading