The various Iron Man Events, and particularly the most popular one of all, The World’s Strongest Man, came along in 1977 and became more popular with TV audiences than either Olympic lifting or powerlifting.

It didn’t surprise me at all that the contests were so popular. The concept was really based on what happened at the very beginning of weight training in the late 1800s. Contests of strength between such men as Eugen Sandow and Cyclops (whose real name was Franz Bienkowski) drew packed houses all across Europe. The Highland games in Scotland always included strength events, and pulling planes and trains has been around since, well, there have been planes and trains to pull.

As it so happens, dumbbells and barbells are still the tools of choice for the top strongmen in the world. And that brings up the inevitable question: should a person getting ready to take part in a strongman contest concentrate on pure strength movements or should he spend more time on the more explosive lifts?

In my mind, the best program is a combination of both ideas because both enhance functional strength, and that’s what every athlete in any sport is really looking for. The formula for a strongman athlete is really no different than it is for a football player or someone wanting to improve his tennis game: Increase overall strength by 40 to 50 percent and practice the skills needed in his chosen sport, and he will perform at a much higher level. 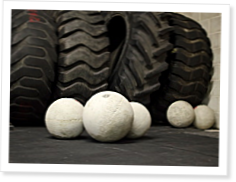 Bill Starr goes over the finer points of training to lift big loads in strongman competitions.

In Building Behemoths: Part 1, I outlined a number of exercises useful to any… Continue Reading

Programming isn’t hard, says stongman guru Rob Orlando. While it’s easy to get lost in the minutia, you need to see the big picture.

“We’re doing this to get healthier, fitter… Continue Reading

A tire flip is not a deadlift.

“You’ve got to think offensive lineman,” Rob Orlando of CrossFit Strongman says as he instructs Tom Rowland to drive into the tire.

In late October 2011, Hybrid Athletics hosted nine CrossFitters from Israel for four days. The group made the trip specifically to work with box owner and strongman expert Rob Orlando. At… Continue Reading

Every One Can!
Just Do it!