When Syn Martinez walked into the arena, he didn’t notice the stares. As a 6-foot-2 tattooed black man who often wears T-shirts emblazoned with the words “Afro Brutality,” a guy gets accustomed to things.

Beside him was Sarah Grey, an athlete at Martinez’s affiliate, CrossFit Harlem. She’s a 5-foot-7 native of Sweden who is heavily tattooed, and she was there to row.

It was the 2011 CRASH-B World Indoor Rowing Championship in Boston, Mass. And while rowing might be described as brutal, it most certainly isn’t described as urban or gritty. Instead, its stigma oozes of Ivy League institutions and rich folk.

Martinez and Grey symbolized change, with CrossFit athletes increasingly becoming involved in the CRASH-B competition and the sport of rowing.

This year’s competition, held Feb. 16 in Beantown, saw more than 85 athletes who indicated membership at a CrossFit affiliate, according to Greg Hammond of Concept2. In total, more than 1,880 athletes competed. Although Hammond did not have numbers of CrossFit athletes who had raced in previous years, he said “(I) know it was less.” 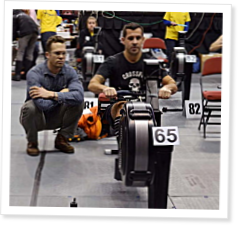 His arms were pinned beneath the wooden dowel. Standing behind him, an… Continue Reading

In a sport based upon the unforgiving, brutal armored battles of medieval Europe… Continue Reading

After an accident left her without the use of her legs, Chile’s Francisca Mardones discovered wheelchair tennis. And the rest of the world discovered her. Andréa Maria… Continue Reading

After missing a post-college shot at the NFL because of the 2011 lockout, Will Johnson became determined to make it to the big league. CrossFit, he says, made the difference. Andréa Maria… Continue Reading