From Mud to Mortar by Dallin Frampton - CrossFit Journal

From Mud to Mortar

Over three years, CrossFit Inc. and affiliates around the world have literally changed the landscape in a handful of villages in Kenya.

CrossFit Inc. has been involved with changing lives along the eastern seaboard of Kenya for the past two-and-a-half years. Taking the early initiative, CrossFit HQ stepped up in 2011 and sponsored the construction of a school building in the village of Dzendereni after learning that about US$10,000 builds two rooms large enough to hold an entire elementary-school class.

After construction and dedication of the new building, CrossFit saw the impact the school made in the small community and united affiliates to sponsor similar projects through the Hope for Kenya fundraiser, which raised more than $300,000 in February 2013.

To date, CrossFit and its affiliates have built a total of eight two-room school buildings, four water cisterns, 400-plus desks and a handful of latrines. Two more cisterns and another two-room school are well on their way and will be completed by the time the CrossFit Games crowns champions in July.

With each school sponsored by a CrossFit affiliate, we stamp the name of the gym across the side of the building to solidify the bond between village and box. The schools and cisterns change the lives of rural Kenyans dramatically and stand as a testament to the CrossFit tradition of helping others in need. 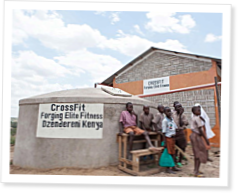 It Makes a Village

Dallin Frampton built a home in Kenya, and now CrossFit is building momentum for its humanitarian efforts in Duruma land.

After literally building my own shelter in Kenya, I… Continue Reading

For several years, CrossFit Inc. Founder and CEO Greg Glassman and his legal team have been fighting a battle with the National Strength and Conditioning Association (NSCA) and the American College of Sports… Continue Reading

What Really Matters to Pat Sherwood

Road warrior leaves home with seven pairs of socks and discovers one of life’s great secrets.

Former NFL player Michael Houghton found CrossFit and then went back to strength training. Now he’s come full circle and believes CrossFit is the best program for him.

Thank you Dallin for this amazing Journal Article, and all that you do for the CrossFit community and the entire world. You are a brilliant example of the intangible qualities of a leader, and are a great ambassador for CrossFit. - Greg Amundson