“Welcome. Welcome to hell,” CrossFit HQ’s Pat Sherwood tells him with a laugh.

Sherwood spent several days with Froning in his hometown of Cookeville, Tenn., where Sherwood got a taste of what it takes to be the reigning champ. That meant a lot of workouts and perhaps some processed sugar.

On this particular day, Froning begins with a drug test he found out about only 15 hours earlier.

Along for the ride is James Hobart, who lived and trained with Froning in January and February as a way to prepare for the Games season.

After the drug test, the day consists of multiple workouts and ends with a phone interview with The New York Times, a game of hockey and at least one doughnut.

“There’s no real method to the madness,” Froning explains of his programming. “Lift something heavy usually once a day, maybe twice. It depends. Get out of breath. A lot.”

He also works on his weaknesses, but not to the point where he creates new ones.

And he’s gunning for his fourth consecutive Games title, though he acknowledges that the mental part of being a competitive athlete takes its toll.

He adds: “And it’s not necessarily even the working out but it’s the thinkin’ about workin’ out.” 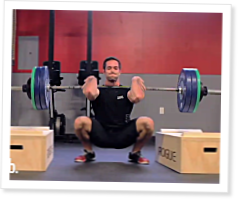 After Day 1, Games veteran Alex Nettey sat atop the Leaderboard in a spot many had reserved for Kyle Kasperbauer, who… Continue Reading

When Samantha Briggs sent Lindsey Valenzuela a Facebook message earlier this year and asked if she could come train and live with her, the Southern California athlete was taken aback.

This Is Annie Thorisdottir

When she started CrossFit in March 2011, Margaux Alvarez had a clear goal. This year, the 28-year-old accomplished her mission by qualifying for the CrossFit Games.

As a child, Annie Thorisdottir took ballet. It didn’t stick for long, though. Like her cousins, she wanted to try gymnastics. She made it to Iceland’s national team but quit… Continue Reading

3 Comments on “Rich Froning: Day at the Office”

Awesome Athlete and a true inspiration to me.

Some other possible combos would be “root” along with “root”, or “cusadmin” as well as “highspeed”. If that doesn’t do the job, and it isn't on the box or the wireless router alone, well, you need to simply look at the instruction manual. Now we won't suggest some other options.