I looked at the strong, intelligent, accomplished woman in front of me. Only 11 years separated us, but at that moment the gulf between us felt enormous.

I’m 40 years old and attended college in the mid-’90s. It was the height of the grunge and riot grrrl movement, an important part of third-wave feminism, which began in the early ’90s. At the time, feminism was punk rock. It was cool and it was anti-corporate. It was Doc Martens and flannel shirts, Kurt Cobain and Bikini Kill.

All these years later, as a married mom of two kids, I still consider myself a feminist. I’m in good company—Beyoncé has become very public about her feminism. She wrote an essay for the Shriver Report titled “Gender Equality Is a Myth” and sampled a feminist lecture in her song Flawless. If anyone can rehabilitate the man-hating, dour reputation of feminism, the gorgeous, sparkly, almost universally loved Beyoncé isn’t a bad choice.

But when I bring up the word “feminism” to some of my younger friends, they recoil in distaste. It’s an opinion shared by successful, independent women who believe strongly in gender equality.

How did the word become so reviled? 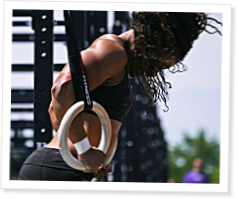 Scientists and meditation experts explain how focus and mindfulness can help athletes rise above burning discomfort to improve fitness.

On the surface, pain seems straightforward. You get… Continue Reading

Veteran and affiliate owner Atom Ziniewicz struggled with post-traumatic stress disorder, depression and bipolar disorder. He ultimately lost his battle, but he fought with his CrossFit… Continue Reading

What does it take to write a book? Hilary Achauer talks to Samir Chopra and bestselling novelist Eleanor Brown about the joy—and pain—of writing.

When all she wants to do is stop, Eleanor Brown… Continue Reading

Researchers are discovering exercise—especially intense exercise—can be an effective part of treatment of addiction, but it isn’t the only part.

The solitary-confinement cell at… Continue Reading

I come from a generation that reels at the word "feminism." It carries a negative connation where women are thought of as ball-busting man-haters. Up until recently, I never gave the term feminism a second thought. Over the last 2 years, I've been studying Gender & Women Studies at Denver University and have come to understand feminism in an entirely different light.

While I believe that the meaning of the word has transformed significantly over the decades, I feel that it's important for young girls and women to understand the waves of the Women's Liberation Movement that took place during the nineteenth and twentieth centuries. Great strides have been made throughout history, but the status women carry today has blinded the gender inequalities that still exist.

As a young mother, wife, student and entrepreneur, I now consider myself a feminist.

The word Feminism hasn’t become poisoned. It is poison. What began as a noble cause has emasculated and effeminized our culture to a disgraceful level. And as long as society keeps strolling out morally bankrupt individuals like Beyonce and others as “role models,” the confusion surrounding gender will persist.

Like it or not, by adopting the word “feminism” you have to adopt the views of it’s founding mothers. Its a package deal. In 1971 there was produced by these founding mothers a document called "The Declaration of Feminism." It says this, "The end of the institution of marriage is necessary condition for the liberation of women. Therefore it is important for us to encourage women to leave their husbands and not live individually with men. All of history must be rewritten in terms of oppression of women. We must go back to ancient female religions like witchcraft." Feminism on the surface is an equality issue. And at it's core is a radical anti-male, anti-life agenda that is being used by the globalist to destroy humanity and bring about a New World Order. Just sayin’…

Now, lets get one thing straight: a woman with equal ability should have the same opportunities as a man. She shouldn't be given a leg up or down because of her gender - it should all be based on ability.

Luckily, we as females don’t need the word in order to be treated kindly as fellow human beings. Women act like that without the word “feminism” somehow men have license to walk all over them and get away with it. But we don’t need an entire social movement to call anyone out on bad behavior.

The differences between men and women should be celebrated, not erased. But masculine and feminine have become dirty words. The feminist establishment insists gender isn’t biologically determined. Indeed, the purpose of the war is to convince women they’re really no different from men. All those physical, cognitive, and emotional differences they think exist are merely social constructs — the result of centuries of restraints and stereotypes imposed by a male-dominated society.

I could go on and on for ever. But I’m going to leave it there for now. At the end of the day, just know that yes men are going to admire you if you wear a skirt. And thats okay. And if you want to run with the boys, don’t get bent out of shape when they treat you like one.

Thank you for this article. The best feminist article on feminism I've read in along time. As an older women I appreciate the insight into where feminism may have got it's bad rap. Also the insight into the wonderful young women I see at the box and in the work place who, as you say, "walk the walk" but cannot bring themselves to "talk the talk".

Thank you for a great article!

“We need to reclaim the word 'feminism'. We need the word 'feminism' back real bad. When statistics come in saying that only 29% of American women would describe themselves as feminist - and only 42% of British women - I used to think, What do you think feminism IS, ladies? What part of 'liberation for women' is not for you? Is it freedom to vote? The right not to be owned by the man you marry? The campaign for equal pay? 'Vogue' by Madonna? Jeans? Did all that good shit GET ON YOUR NERVES? Or were you just DRUNK AT THE TIME OF THE SURVEY?”

- Caitlin Moran, How to Be a Woman