Warriors on the Waves by Andr&#233;a Maria Cecil, Dave Re and Naveen Hattis - CrossFit Journal

Warriors on the Waves

By Andréa Maria Cecil, Dave Re and Naveen Hattis

Operation Surf takes wounded members of the military into the ocean as part of its mission to rehabilitate with recreation.

It was Sept. 25, 2008. Sgt. 1st Class Charlie C. McCall, a U.S. Military Police officer, was asleep beneath a tent surrounded by buildings in Kandahar, Afghanistan. One of his soldiers slept nearby. The rocket hit right between them.

McCall has post-traumatic stress disorder, and his left leg is almost always in pain—“crazy pain.” Doctors might eventually amputate it.

But today things are good. McCall has spent five days in the Pacific Ocean learning how to surf.

A program run by California-based nonprofit Amazing Surf Adventures, Operation Surf teaches wounded active-duty and veteran members of the military how to surf. Instructors—many of them world-class surfers—are paired with a military member or veteran. Some are managing PTSD; others are becoming accustomed to life without one to four limbs. The goal is to give the wounded warriors “the confidence to move forward in a positive direction,” according to the Operation Surf website. 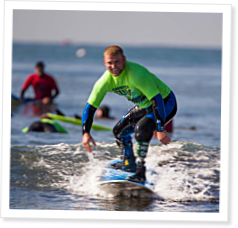 Keith Zeier fought for a year to learn how to walk. Learning the push jerk at a Level 1 Cert is going to be easy.

Zeier discovered CrossFit in 2006, when he was a recon… Continue Reading