All Access Part 2: Roll On by Chris Cooper - CrossFit Journal

Chris Stoutenberg fractured three thoracic vertebrae falling from his friend’s balcony on June 18, 1997. Paralyzed from the waist down, “Stouty” woke up with metal rods in his spine and a huge hole in his life: Sports, at which he’d always excelled, seemed gone forever. He was 19.

Despite the injury, Stoutenberg fought to recover, copying the exercises of more “advanced” rehabilitation patients he saw in his therapy sessions. By September 1997, he was back in school. After a year at the University of Guelph, he was offered a Division 1 scholarship for wheelchair basketball at the University of Illinois, where he played for three years. He won a gold medal at the 2000 Paralympic Games in Sydney, Australia, on the Canadian Men’s National Team, and another in 2004 in Athens, Greece.

In March 2012, Stoutenberg’s cousin told him about CrossFit. That led him to Ontario’s CrossFit Indestri. Over time, his coaches began posting videos of his workouts to YouTube. In short order, CrossFit found Stouty. Paraplegic athletes from around the world began seeking his advice.

In turn, CrossFit created a chance for these athletes to regain their strength, enjoy therapy more and compete. It’s a sharp contrast to many rehabilitation programs for the newly injured in which therapists don’t challenge their patients. 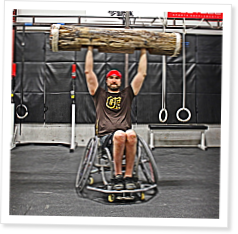 With the NHL and NFL seasons in full swing, concussions are a hot topic. Blows to the head can have serious short- and long-term consequences, so why do athletes risk brain damage by… Continue Reading

Twenty-two veterans will kill themselves today, according to the nonprofit group Iraq and Afghanistan Veterans of… Continue Reading