After 30-year-old Brittany Gill was diagnosed with cervical cancer, she did what any CrossFit athlete would: She used her chemotherapy IV pole for an overhead squat.

“I didn’t realize at the time how dangerous that particular thing was,” Gill says.

Chemotherapy drugs can be extremely harmful to skin, so throwing a pole overhead definitely wasn’t the best idea. But Gill started a trend. To stave off the boredom of seven hours of chemo, she began posing for photographs in the hospital while doing various moves frequently found in CrossFit workouts: pistols, clean and jerks, Turkish get-ups.

To say she’s taken her diagnosis in stride is putting it lightly.

“To me it was just an immediate thing to joke about, like, ‘I don’t have to warm up because I have cancer,’” Gill says.

At CrossFit Salem, she quips: “Why should I have to warm up? What’s the worst that can happen? I’ll get cancer?”

Gill, mother to a 1-year-old, also participated in the CrossFit Games Open this year, finishing 571st in the North West Region.

“It’s hard to sit around and feel sorry for yourself when you have a 1-year-old that’s running around the house.” 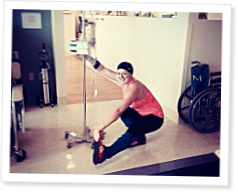 “My platoon and I, we were hit with five… Continue Reading

When it comes to the clean, it’s all about fully opening the hips.

Rory Zambard on Coaching: Have a Plan

The lounge at Nadia Shatila’s gym contains many leather-bound books and smells of rich mahogany. It has a cache of whisky, a dartboard and a carefully arranged collection of assorted… Continue Reading

Coaching starts with a game plan, says CrossFit Level 1 Seminar Staff member and CrossFit Games athlete Rory Zambard. In addition to other elements, that plan should include… Continue Reading

Awesome and amazing woman and a great CrossFit community that stands with her and her family! Thank you for sharing and keep fighting!