RRG members to save almost $1 million in premium costs from June 1 through 2015.

First, the minimum premium for all affiliates will be lowered to US$1,185 annually, a cost savings of $165 per member. Second, the total premium cost will be discounted 20 percent for members who have not had a previous claim. The net decrease in cost is 14.7 percent, a savings of approximately $958,724 for CF-RRG members through 2015, according to a Perr & Knight study conducted in December 2013.

The changes validate the success of the CrossFit RRG program but more importantly confirm many of its original tenets. As a whole, the CF-RRG community is safer than the fitness world at large, which has led to net profit for the insurance company.

As originally planned, CF-RRG will return its profits to its members in a manner that will not threaten the financial security of CF-RRG. The board of directors and its actuaries, administrators and regulators have come to a consensus that these cost reductions are the best approach. CF-RRG truly is by the community, for the community: No other insurance company has returned its profit to the CrossFit community. 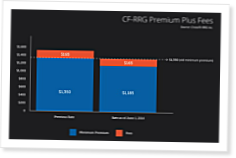 By Peter Davis and Andy Ruddick

Over 30 percent of CrossFit affiliates in the U.S. turn to community-owned insurance to protect their businesses.

Four years ago, there was an idea to create something that would represent our… Continue Reading

It was a chance meeting: two strangers, one car, a Barbells for Boobs event.

Stocked up in Stockton

The story is classic: Gabe Subry and Vince Carter were training out of a traditional gym, and when their clientele grew and the space wasn’t able to accommodate CrossFit… Continue Reading