All Day With Chad Mackay by Michael McCoy - CrossFit Journal

All Day With Chad Mackay

It’s 5:45 a.m. in Sydney, Australia. Three-time CrossFit Games competitor Chad Mackay is finishing his breakfast. By 6:15, he’s got his first cup of coffee in hand and is off to coach the 6:45 class at CrossFit Active Waverton.

“Pretty much a standard day,” Mackay explains while he drives.

He’s at the chiropractor at 9 and at the exercise physiologist at 9:45. Just after 10:15, he’s stretching while he eats—with the clock running.

“It’s more about making sure that both sides are even,” he says, explaining why he times his stretching. “So I’ll go five minutes on the left (leg) and then switch.”

By 10:30, it’s time to coach class again. Afterward, he takes an hour to film segments for his website and then coaches a fourth class at 12:30 p.m.

Just after 3 p.m., he tackles CrossFit Games Open Workout 14.5. Four minutes after, he’s back to filming segments for his website.

By 3:45 p.m., Mackay is building up to a heavy triple in the power snatch. An hour later, he’s coaching Lynne Knapman, who competed in the Masters 50-54 Division of the CrossFit Games in 2013 and will do so again in 2014.

The 32-year-old Mackay will coach two more classes and do three more workouts before his day ends at around 10:30 p.m.—almost 17 hours after it began.

“Get ready for the season,” he says with a smile at day’s end. “It’s gonna be a cracker.” 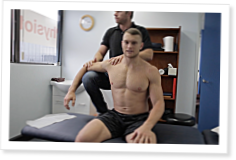 This Is Annie Thorisdottir

As a child, Annie Thorisdottir took ballet. It didn’t stick for long, though. Like her cousins, she wanted to try gymnastics. She made it to Iceland’s national team but quit… Continue Reading

Shortly before 4:30 a.m. on the first day of individual competition, Director of the CrossFit Games Dave Castro sums up the collective feeling of the day.

“This morning is… Continue Reading

When Scott Olson’s daughter told him about her CrossFit workouts that involved hundreds of reps at a time, he thought it was “nuts.”