When “Harvard” Won’t Do

A decision in 1976 by the Radcliffe women’s crew continues to affect every single woman who puts an oar in the water at Harvard University today.

In 1976 in Cambridge, Massachusetts, Nelia Newell was a young college student at Radcliffe College, a liberal-arts institution founded in 1879 that essentially acted as the sister school to the all-male Harvard University.

Newell played ice hockey, and she joined the Radcliffe women’s crew in 1975. The team first competed in 1971, and it won its first national championship in 1973. Newell and her teammates were proud of what they had accomplished in just a few short years.

At the time, things were changing fast. Harvard and Radcliffe had begun a lengthy merging process that wouldn’t be totally complete until 1999. Along with other changes to the athletic department, the plan was for all Radcliffe sports teams to change their names and compete under the world-renowned “Harvard” handle, but Newell and her teammates, proud of their Radcliffe origins, didn’t feel they needed a new name to feel legitimate.

The issue came down to a vote. The captains of each of Radcliffe’s sports teams voted on whether to remain Radcliffe and compete in black and white or to become Harvard and compete in crimson.

Every single team chose to switch to Harvard, except one: the crew. 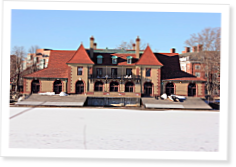 Learning How to Row With an Olympian: Part 1

By Erin Cafaro and Rory McKernan

Harvard University Crew members and coaches advise CrossFit athletes to use pacing to become more efficient on the rowing machine.

For many CrossFit athletes, the rowing… Continue Reading

Join Rory McKernan of CrossFit HQ Media as he receives some rowing tips from Rowing Seminar trainer Erin Cafaro, who won an Olympic gold medal in Beijing in the women’s… Continue Reading

To learn proper pacing and how to relax on the recovery while rowing, CrossFit Rowing’s Shane Farmer likes the uphill drill.

Angela Hart is a Concept2 Master Coach and a CrossFit certified trainer. She explains her rowing strategy for Fight Gone Bad. The goal is to row as many calories as possible in one… Continue Reading