A Workout to Remember by Chris Cooper - CrossFit Journal

A Workout to Remember

USA Memory Championship tests the skills of competitors who can memorize a deck of cards in 60 seconds.

The elevator to the top of the Consolidated Edison Building is jammed with bodies and big brains. On the way to the 19th floor, where the USA Memory Championship will be held, contestants, fans and parents maintain a nervous silence. Among them is tall, bearded Nelson Dellis, the 2011 and 2012 USA Memory Champion.

“Did you do your CrossFit thing on the way here?” a coiffed, matronly parent asks Dellis. Others turn their faces up toward him. Dellis recounts his score and efforts on CrossFit Games Open Workout 14.5 while the others, eager for distraction, listen attentively.

Dellis is a passionate member of I Am CrossFit in Miami, Florida. He competes in fitness events, but his real game is memory: the ability to hold numbers, faces, words or other data in his brain and recount them in order, sometimes in staggering quantities and speed. His capabilities are reminiscent of the fictional card-counting Raymond Babbitt from the movie “Rain Man,” but Dellis says anyone can learn this game.

The experiences of others have borne out Dellis’ claim. As documented by Josh Foer in “Moonwalking With Einstein,” many “mnemonic athletes” compete in memory events without any special neurological wiring. They train for it the way CrossFit athletes train for the Open. 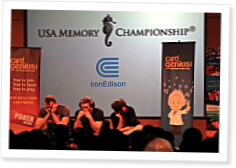 The Cogni-Gym: From Whiteboard to Chalkboard?

Can workouts help produce smarter kids? Chris Cooper has a study lined up to answer that question.

Imagine a drug that would put you 33 percent ahead of your peers, nationwide, on standardized… Continue Reading

CrossFit Inc. has revolutionized the business of fitness, and now hosts of others are riding the wave. Chris Cooper reports.

One man’s sin is another man’s commandment.

Though illegal, polygamy is still practiced in Utah… Continue Reading