1:17 On Jan. 12, Ogar was competing in the OC Throwdown when a freak accident in a snatch event resulted in a severed spinal cord. Ogar took listeners back to the day he was injured and explained exactly what happened, and he detailed his road to recovery, including two major surgeries. He’s done his rehab at Craig Hospital in Colorado and said he was like a newborn as he relearned even the simplest tasks. Throughout the process, Ogar has maintained a great attitude and believes his faith has been instrumental in helping him overcome challenges. Ogar gave his response to critics who say CrossFit is dangerous and described why he thinks CrossFit has saved his life given that only 30 percent of people survive injuries such as his. Looking to the future, Ogar talked about what’s next in his life. 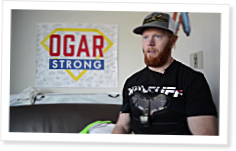