1:37 Rochelle Thayer owns CrossFit TNT in St. Charles, Missouri. She’s good friends with Kevin Ogar and is organizing the Battle for Courage fundraising event. Ogar suffered a spinal-cord injury at a competition on Jan. 12 and has no movement below the waist. Thayer spoke about the event and how the community aspect of CrossFit will be its main emphasis, and she described some of the other activities they have planned, including a competition. Thayer also explained how people can get involved with the fundraiser.

11:16 Nicole Gordon and her husband run CrossFit Hampton Roads in Yorktown, Virginia. Gordon described her Accelerate program that acts as an intermediate class to help athletes progress from Takeoff classes to regular group classes. She also talked about why they offer open gym time and how they have rules to govern it. CrossFit Hampton Roads has a Competition Club, but Gordon said it’s not the focus of the affiliate and she was a little hesitant to start it. Many gym owners struggle to know when it’s time to add new programs, and she offered some advice to the affiliate community, including why athletes have to meet certain criteria to participate in some programs at her gym. 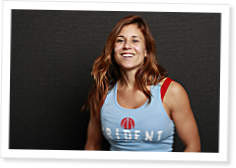